The change occurred because Goidelic speakers almost always render with an F what in Brittonic languages is U/V, W or Gw;  compare Scottish Gaelic Fionn with Welsh Gwyn, both meaning white or fair.

The last variant, Quinty, may be a relic of the times when the letter "F" did not occur in the Scots alphabet and "QUH"  was used to convey the sound.  This combination still survives in some place names

At a time when peoples' surnames had only local significance and were derived from their appearance - Short or Bauld;  from their occupation - Smith or Cook;  from their parent - Wilson or Peterson;  from where they lived - Forrest or Wood or from a clan chief - Macdonald or Fraser,   Fenty was an early example of a family being named after the land from whence they arose

The name is recorded as being in use as a surname in the fifteenth century - Andrew Quhenty of Quhenty.

There is now proof that the Quhenty family were living on the land of Quhenty in 1542. Andrew Quhenty was registered as occupying the land from Walter Ogilvy of Boyne. This is from a document held by the Elgin Family History Centre. The next recorded family name is an Andrew Quhenty/Whyntie living at Fordyce in the mid 1600s.

To give us an idea of who's been visiting, you can write in the guestbook. 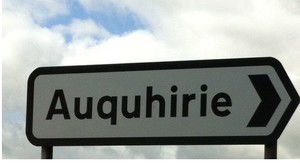