A few specialities of the North East cuisine 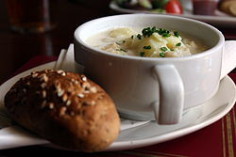 This soup is a local specialty, from the town of Cullen in Moray on the north-east coast of Scotland. The soup is often served as a starter at formal Scottish dinners. Cullen skink is widely served as an everyday dish across the North East of Scotland.

Local recipes for Cullen skink have several slight variations in the use of milk instead of water or the addition of single cream. Cullen skink was traditionally served with "breed" (bread), the old Scottish term for oatcakes and garnished with "sithes" or "sibies" (chives)

Skirlie is a Scottish dish, made from oatmeal fried with fat, onions, and seasonings. It can be used as the basis for white puddings, but is best served as a side-dish or used as a stuffing for chicken or other fowl. Lard, beef dripping or butter are used for frying.

Speldings are haddock or whiting,  split and sun-dried on lines or nets.     When they are dried, the flaked flesh is beaten together with mashed potato to make a simple dish.  The texture of the fish gives the appeareance of the potato being " hairy"    They can be eaten with a mustard sauce.

Stovies apparently get their name from the French etouffe – to stew in a closed vessel.

Lots of Scots culinary terms seem to have a French origin. Ashet, a large plate, from assiette: quenelles, dumplings: lorraine soup from a la reine: howtowdie from hutaudeau, a pullet: gigot of lamb, are but a few.

There are as many variations of stovies as there are people cooking them, some with meat added but this is how I recall them.

Gently fry onions until soft not brown in beef dripping. Add sliced potatoes and salt pepper to taste with some water. New potatos are best. Cover and simmer until the potatos are cooked. Sometimes, at this stage left over minced meat is added but this is not traditional. A sprinkling of that staple of Scots cooking, oatmeal is added. The whole pot is shaken well and left to stand for ten minutes

Brose is a Scots word for an uncooked form of porridge: oatmeal is mixed with boiling water and allowed to stand or "steep"for a short time. It is eaten with salt and butter, milk or buttermilk

There are several variations of this simple dish

Peasemeal is a flour produced from yellow field peas that have been roasted. The roasting enables greater access to protein and starch thus increasing nutritive value. Traditionally the peas would be ground three times using water powered stone mills. The color of the flour is brown yellow due to the caramelization achieved during roasting while the texture ranges from fine to gritty.

The dish is made by the addition of boiling water or stock to the peasemeal  which is then eaten immediately with butter pepper, salt  or, occassionally, sugar or raisins.

Legend has it that, in 1475, the Duke of Atholl captured his enemy, the Earl of Ross, by filling a well where Ross was known to drink with this potent brew.  Ross drank deeply of the liquor and was captured.

This is one of the many recipes for this wonderful combination of all things Scottish: oatmeal, heather honey,  pure water and whisky!

Mix the oatmeal and water; let it stand for an hour; sieve and strain the liquor off; blend the liquor with the honey using a silver spoon; make up to 1 quart with whisky.    Shake the quart bottle before serving

It can be served,as a dessert, chilled with whipped cream and topped with toasted oatmeal

Porridge, brose and, sometimes, broth were often referred to in the plural.    "Eat them up before they get cold"

Fill a pudding dish with milk from the second milking; stir in 2 tablespoons of syrup and mix well.  Spread on top the cream from the first milking, put into a moderate oven and bake until firm to touch and golden brown.

This cheese cuts into smooth, creamy slices and is short and free in texture.

After the N-V CJD  scare and subsequent legislation banning the sale or use of brains by the meat trade, it is now not possible to create this former dish.  It was, at one time, greatly appreciated among farming folk.

Ingredients:-   A sheep's head, a slice of ham,  a carrot, a small turnip, two onions, a small cabbage, a bunch of pot herbs, salt & pepper, 3 oz of pearl barley, a tablespoonful of chopped parsley.

Method :-    Singe, wash and soak the head which should be split.  Take out the brains which can be made into brain cake with the ham and served separately. Put the head into a large pan with cold water and salt and boil, skimming off any scum that arises until no more remains. Add the washed pearl barley, bring to the boil and simmer for one and a half hours. Add the vegetables, well cut up, and simmer again for one and a half hours.

The head may be served with a portion of the vegetables.

The chopped parsley is  served with the broth, seasoned to taste. 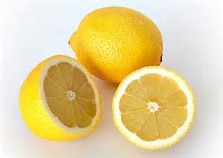 Instructions    Make a syrup of the water and sugar. Boil. When cold, add tartaric acid, lemon juice and the white of eggs beaten to a stiiff froth.   Bottle.

To serve, add a wine glass of the cream to a tumbler of water and add bicarbonate of soda to make it effervesce.

Rub the suet into the flour and add oatmeal, baking powder, sugar, sultanas and currants and the ginger and cinnamon. Blend together and add the eggs and syrup. Stir well and add just enough milk to firm.
Put the cloth (cloot), into boiling water first then spread onto your table and sprinkle a liberal amount of flour  and possibly sugar depending on taste over the inside. Put the mixture into the middle and tie up, leaving a wee bit of space for the mixture to expand

Place an upside-down saucer at the bottom of a deep pan  to stop it sticking and put the tied cloot in and cover with boiling water and simmer for about 3 hours.

The cloot was often kept specially for the making of dumplings.

The ultimate all purpose food.     Served warm with custard or brandy butter. fried for breakfast with homemade black pudding and golden yolked, truly free-range eggs or eaten cold as a slice of cake spread with butter.  Perfect insulation against the northeast weather