The Surrounding Countryside and Towns

A gallery of images from the area around Whintey 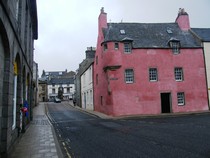 These attractive towns and villages have their own histories and are worth visiting and exploring.   Many generations of Fentys and Whinteys would have lived out their lives in honest endeavour around these places

The pictures of the Brig o' Banff and the clock are reminders of the famous outlaw James Macpherson, hanged in 1700.

Fareweel ye dungeons dark and strong
Fareweel, fareweel to thee
MacPherson's song will not be long
Upon the gallows tree.
Sae rantonly, sae wantonly,
Sae dauntingly played he.
He played a tune and he danced a-roon,
Below the gallows tree.

The reprieve was comin' o'er the brig o' Banff
To let MacPherson free;
But they pit the clock a quarter fore
And hanged him to the tree.
Sae rantonly, sae wantonly,
Sae dauntingly played he.
He played a tune and he danced a-roon,
Below the gallows tree.

The first and last verses of Macpherson's Farewell

The words are based on the real Jamie MacPherson's farewell address which MacPherson wrote before he was hanged on November 16, 1700. He reportedly played this tune on the gallows and offered his fiddle to anyone who could play it.  As no-one took him up on the offer, he broke the fiddle.