Battles in the Fenty Homelands

Unlike the Debateable Lands of the Scottish Borders where reiving families on either side of the border, and sometimes on both sides, fought internecine wars and where invading armies of Anglo-Saxon and later English clashed with Pictish and later, Scottish soldiery or The Highlands, where clan warfare was a way of life, the North East  of Scotland, the homeland of the Fenty/ Whintey family, has seen few battles in the centuries from the Viking incursions in the 9th century to the 1745 Jacobite Rebellion which ended with the last battle fought on British soil.

Indulf , son of Constantine II, one of the early kings of Alba - what was to become Scotland - had  annexed Lothian and the future capital of Dun Eidan ( Edinburgh) but was killed in battle with the Orcadian Norsemen for the mastery of Moray. The battle took place on the moor west of Cullen. The ancient chronicles say

A large raiding party of Vikings had ravaged the Buchan lands and were returning to their longships at Gamrie when they were attacked by Mermane, the mormaer or royal steward of Buchan. The Norsemen were caught beneath the cliffs and, despite the arrival of reinforcements, were totally defeated, their corpses being thrown into natural depressions in the ground hence the name of the battle.

The Scottish commander decided to appeal for divine help. He declared to his army that if they defeated the Danes in battle, he would build a church to Saint John on the site where the enemy was now encamped.

A church was erected and the skulls of dead Norsemen built into the walls - the Kirk of the Skulls.  A later church still stands on the site overlooking the bay. 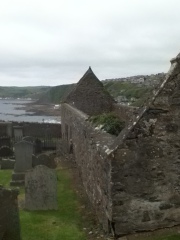 The Church of St John overlooking the bay 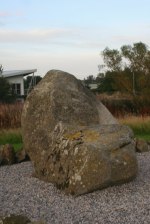 Within the period of the Scottish Wars of Indepence, there was a brief civil war between the Comyns and Robert Bruce, the new  king. Bruce had murdered his rival, John Comyn, "The Red Comyn" and thus earned the enmity of the Comyn family and their supporters.  He defeated the the murdered man's namesake, John Comyn, Earl of Buchan at the Hill of Barra, near Inverurie.  Legend has it that, suffering from illness, he was carried to the battle and directed it seated on a stone.

Afterwards, Bruce ordered savage reprisals against the lands of the north-east known as the Harrying of Buchan 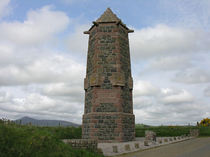 Harlaw, titled Red Harlaw because of the ferocity of the fighting was essentially a clan battle for the extensive lands of the earldom of Ross. The opposing forces were those of Donald, Lord of the Isles from the west coast and  the Earl of Mar acting on behalf Robert Stewart, the Duke of Albany and Regent of Scotland from the north-east

It has been described as a battle between the Gaelic speaking Highlanders and the Scots speaking Lowlanders.

It ended with vast numbers of casualties on both sides but Donald was forced to retreat and Mar claimed a victory. 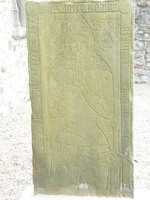 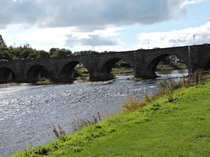 James Graham, 1st Marquis of Montrose led the Royalist forces against the Covenanters in the religious civil wars of 17 C. Scotland.  In his annus mirabilis of September 1644 to August 1645, he won many battles against superior odds.

At Aberdeen, he besmirched his reputation by allowing his Irish troops to sack the town and kill civilians in the aftermath of his victory

At Fyvie, the Covenanters under Argyll came close to defeating him but he slipped away with the remains of his army to fight another day.  He was finally defeated at Philiphaugh the following year. 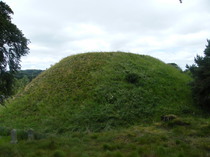 The bass of Inverurie. The motte of a motte and bailey defensive structure

As part of the '45 Jacobite Rising, a rebel force under Lord Lewis Gordon, crossed the rivers Don and Urie to attack the numerically weaker Hanoverian government troops under Macleod of Macleod at Inverurie.  Despite fighting bravely through the night, the Hanoverians were driven out and had to retreat.  One of the government prisoners taken was Donald Ban MacCrimmon, the greatest of the Highland pipers.  All the Jacobite pipers refused to play until he was released.  He rejoined the government forces.  This was the third last battle fought on British soil. 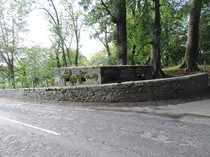 WW II  pill box on the bridge over the River Urie.  Even as recently as 1940, defensive installations were still thought to be  needed to guard the river crossing.  Built 50 metres from the motte and bailey constructed in the 1100's for exactly the same purpose - to  command the rivers Don and Urie at their confluence.