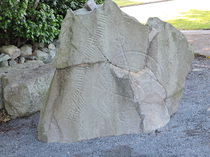 The place names of the North East of Scotland reflect the languages of the peoples who have made it their home. The Picts, Vikings, Gaelic-speaking Scots and Doric- or Scots-speaking Scots.

Pictish, the earliest of these was probably a goidelic language similar to old Welsh with some fusion with that of the earlier Bronze age peoples. It survives only as a few geographic descriptions.

As it was purely oral, little survives though there may be an ogham inscription using an Celtic/Gaelic writing technique to render some Pictish names on the Brandsbutt stone at Inverurie  (see picture)

“Aber” at the mouth of a river e.g. Aberdeen

“Dol” a water meadow e.g Glen Doll or Dollar where Gaelic and Pictish are amalgamated

Gaelic, the languge of the Celtic Scotti and, after the Picts, the dominant tongue in the area gives us:-

“Kin” at the head of e.g.Kinnairdy

“Kil” a church, usually associated with a saint

“Inver” at the confluence of rivers or at the mouth of a river e.g.Inverurie

Norse. There are fewer place names of Norse origin compared to other parts of Scotland, possibly due to their lack of success in the area.

Findlater (Castle) possibly from the Viking for white cliff. 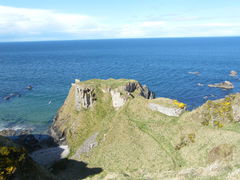 The white cliffs below Findlater Castle 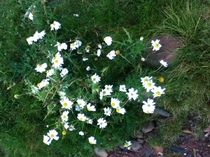 Scots or Doric is easily recognised as it is similar to English.

Whiterashes, Kirkhill are self explanatory but some words are different.    Gowanhill - gowans are daisy like flowers.

Whyntey or Fynty  started off as a Celtic description of the place:-    Inver-quhen-tyne  " At the mouth of the pretty stream".    In time, the inver prefix was dropped and quhen -tyne became when- or fen-tyne and thus, whinty  or fenty