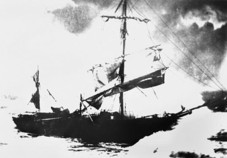 `During Friday, Saturday, and Sunday last, we were visited by a tremendous gale of wind: its effects upon the shipping on this coast have been of the most lamentable and destructive nature. The ELIZA, Greig, of this port, foundered off Montrose 25th inst. Crew saved. The MAYFLOWER of Peterhead, Thom, from this place for Portsoy, was totally lost 24th inst., on the Scotfield [Stotfield] Skerries, near Nairn. Crew saved. The MARCHIONESS of Huntly, of and for Wick, from Leith, is on shore a little to the southward of Blackpots [Blackpotts], near Banff. Crew and passengers saved: (one passenger died on being landed): cargo damaged, but it is expected should the weather keep moderate, the vessel may be got off. About a quarter of a mile further west, a vessel name unknown, was seen on Sunday morning to come in among the breakers, where masses of large rock extend a considerable way out, and immediately became an entire wreck: crew drowned. From the `Rose and Thistle¿ being carved on some of the ornamental parts of the vessel, it is conjectured to have been a British brig. The RIVAL, Leslie, from Riga for Belfast, was wrecked 25th inst., near Pennan. Crew saved, also part of the cargo and materials. The AULTNASKIACK, Patterson, from hence for Inverness, was put on shore 25th inst., on a sandy beach, 6 miles East of Nairne [Nairn], but is expected to be got off without damage. Crew saved. The hull of a vessel, name unknown, was cast on shore 2 miles to the West of Banff. The stern of a vessel has been cast on shore at Cullen, said to have `JEAN of Leith¿ painted on it. Another wreck is reported to have come on shore at Burghead: and on the coast of Fochabres [Fochabers]

Was such a storm the agent that brought a ship to the rocks and survivors to Whyntie centuries before records began?