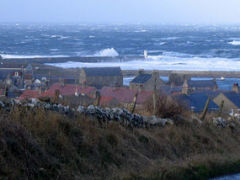 Rosehearty, or "Rizartie"  as it is known locally, did not officially exist until  1680 when Charles II granted it a charter.  It was said to be founded by shipwrecked Danes in 14th century.

Rosehearty is only about twenty  miles from the site of Fynty and, again, the story of shipwrecked mariners appears in local lore 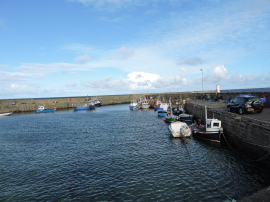 Rosehearty is one of several small harbours or havens along the rocky Moray coast.  The lands around have been ruled by Forbes's, Frasers, and Murdochs.  Rupert Murdoch the media mogul had a great-grandfather who was a Church of Scotland minister there in the 19th century

Among the many wrecks on the Moray coast, is that of the s.s. Fram.   Sheltering from a storm in Aberdour Bay, near Rosehearty, she was torpedoed by a U-boat in 1940. Even although she was close to shore and there were several fishing boats nearby to pick up survivors on life rafts, ten seamen were lost.    The Moray coast has a long history of shipwreck from many causes which makes the Fenty/ Whintey family lore of shipwreck survivors as ancestors even more probable.