The Norsemen,  commonly referred to as Vikings, raided and colonised the north of what was to become Scotland, from the 8th century onwards. The Northern and Western Isles, Caithness and Sutherland along with the western seaboard to Galloway and the Isle of Man, became a Norse kingdom that lasted to the 13th century.

They raided along the eastern coast and, no doubt, settled in places but never established a dominant presence.

Between 950 and 960 A.D., Norsemen from Orkney raided the Buchan coast. They were defeated at Cruden and again, in 1004, at Gamrie where three skulls of the Vikings were built into the wall of St John's church built in dedication of the victory !

In 1012, the Danes commanded by Canute, landed at Cruden  where a battle was fought by Malcolm Canmore II.  A subsequent treaty declared that the  Scandinavians had to  retreat from the North East. 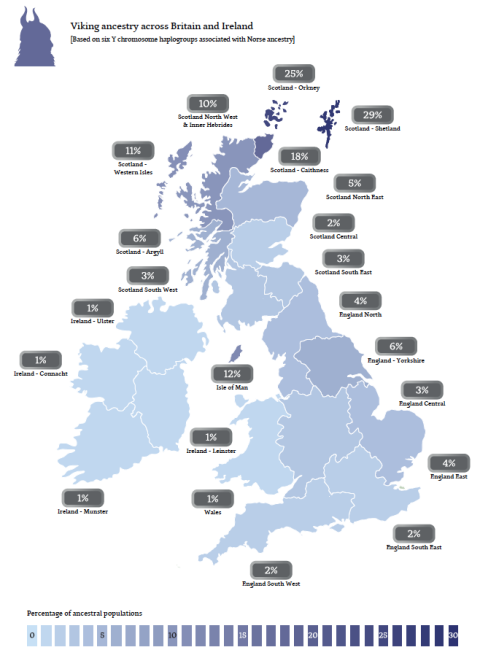 The map shows the percentage of the populations around Scotland with Viking ancestry. It is low, only 5%, for the North East coast possibly due to events described above.   The DNA of one member of the Fenty family from a family with centuries of  history in  the North East does, however, show strong evidence of Baltic/Scandinavian ancestry.