THE SCOTS were the people who came to give their name to Scotland.   The Scotii, were originally colonisers from what is now Ireland. They landed on the west coast of present day Scotland, created their own kingdom of Dalriada and, after a long period of warfare and interdynastic marriages, were united with the numerically greater tribes of Picts and the southern Brythonic tribes, who were under pressure from the invading Anglo-saxons, to form the kingdom of Alba.

For many years the kingdom was called Alba or sometimes Pictavia, until the eleventh century when the Latinised form of Scotia came to be used.   From this, the custom of referring to the nation as Scotland arose.  It is unlikely that, apart from eventually giving their name to the nation, that the Scotii contibuted to the Fenty family background situated deep in the eastern Pictish heartland.

It was from the Irish origins of the Scotti, that Christianity came to the land of the Picts. 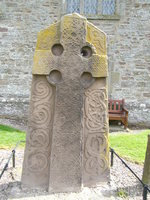